Weather Forecast Tide times Sea Temperature
Site name: S.S. Georgetown Victory
Location: Descriptive location referring to nearest landfall i.e. town, village, harbour or island
Killard Point
Type: Describes whether this dive site can be dived from the shore, from a boat, or both
Boat
Wreck: Dive sites which include a shipwreck (or part of a shipwreck) are labelled with a ‘Yes’
Yes
Min. dive depth (m): The approximate minimum depth of the dive given in metres
2
Max. dive depth (m): The approximate maximum depth of the dive given in metres
6
Max. seabed depth (m): The maximum depth of the seabed at the site taken from the intersect between the dive site point and the depth contour on an Admiralty Standard Nautical Chart
6
Diving experience (min level): The recommended minimum level of diving experience for a specific site, described as Novice (<50 dives in temperate/cold waters and minimum certification of PADI Open/Advanced Open Water, BSAC Ocean Diver or CMAS 1 star), Intermediate (50-100 dives in temperate/cold waters and minimum certification of PADI Rescue Dive, BSAC Sports Dive or CMAS 2 star) or Advanced (>250 dives in temperate/cold waters and minimum certification of PADI Divemaster, BSAC Dive Leader or CMAS 3 star
Novice
Optimal wind direction: The general wind direction which causes minimal exposure at the site, corresponding to 8 points of the compass: North (N), North East (NE), East (E, South East (SE), South (S), South West (SW), West, North West (NW)
SW/W/NW
Exposure: The approximate level of exposure to wind and wave action at the site on any given day, described as Sheltered (inshore sites surrounded by a form of shelter on all sides), Moderate (sites which are partially sheltered) or Exposed (sites with little to no shelter)
Moderate
Tidal strength: Anecdotal description of tidal strength at the site
Marine Protected Area: A Yes or No highlighting whether or not the site occurs within a Marine Protected Area
Yes
Visibility: Anecdotal description of the typical underwater visibility at the site
5-10 metres
Best time to dive: Anecdotal recommendation for the best time to dive the site for optimal underwater conditions. This typically relates to the stage of the tide
Slack high water
Getting there: Directions for getting to the site

By boat from Portaferry or Strangford. The wreck is located on the south-eastern corner of Killard Point and is split in 2 pieces, with the 2nd part of the wreck located approx. 100m SE of the 1st.

Public toilets, car parking and toilet facilities are available at Portaferry and Strangford.

The rocky outcrop off Killard Point slopes down steeply to the seabed made up of cobbles, gravel and sand, where the wreck sits. The 2nd part of the wreck, further to the south east, is scattered into small pieces across the seabed.

Date of loss 30/04/1946. An American steam troopship built in 1945 in Baltimore (LBD 133.83 x 18.92 x 10.49; 7604 g.t). It could accommodate 3,000 men. The vessel was on passage from Sydney to Glasgow with 1,200 Royal Navy personnel and Royal Marines all due for demobilisation. On the night of 29.04 lights were seen off St. John’s Point, a least 12 miles west of her intended track for Glasgow. She ran aground on a calm, clear night and just before midnight, grinding and tearing of steel could be heard up to three miles away. There were no casualties. The vessels back broke and she later split in two halves just towards the bridge. The remains were eventually refloated and scrapped but much of her remains below the water. (Sources: WA B33; Larn & Larn 2002).WA (Wilson Archive)

The rocky reef adjacent to the wreck is covered in dense kelp and mixed seaweeds, including the invasive Japanese wireweed Sargassum muticum. A variety of fish are found around the wreck including Goldsinny Ctenolabrus rupestris and Cuckoo Wrasse Labrus mixtus. Other common species include the lightbulb sea squirt Clavelina lepadiformis and common sea urchins Echinus esculentus .

Safety: Safety tips
Latitude, Longitude: The approximate XY coordinates for the dive site in Decimel Degrees (DD). These can be converted to DMS or DDM by following the link below
54.309867, -5.525333
Open in Google Maps Convert coordinates to DDM/DMS 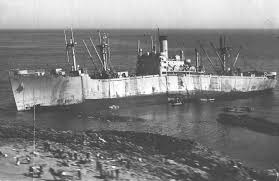